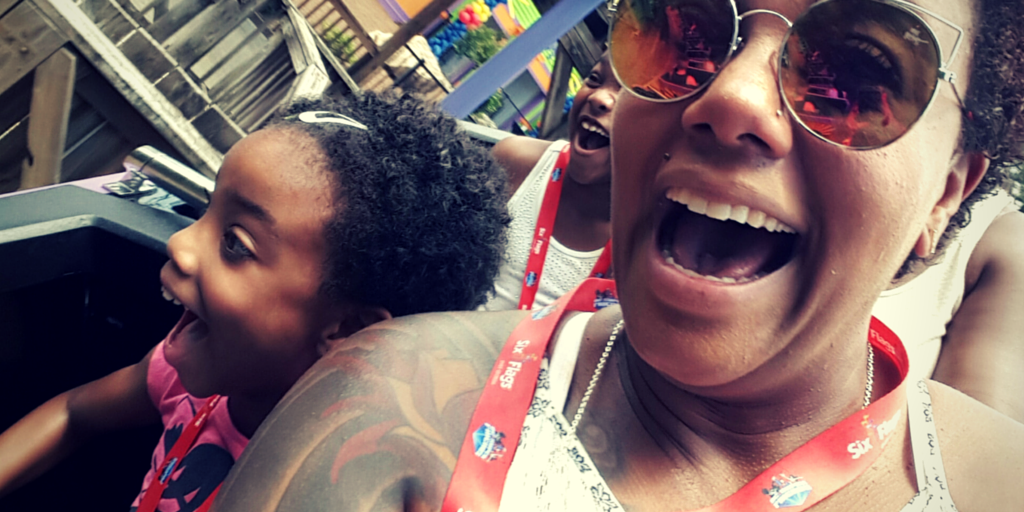 I would be lying if I didn’t say that as I picked mini up from school on her last day of school I wasn’t a little teary-eyed. On May 26th, we celebrated a mighty successful year as a kindergartner.

Where are the books on this? 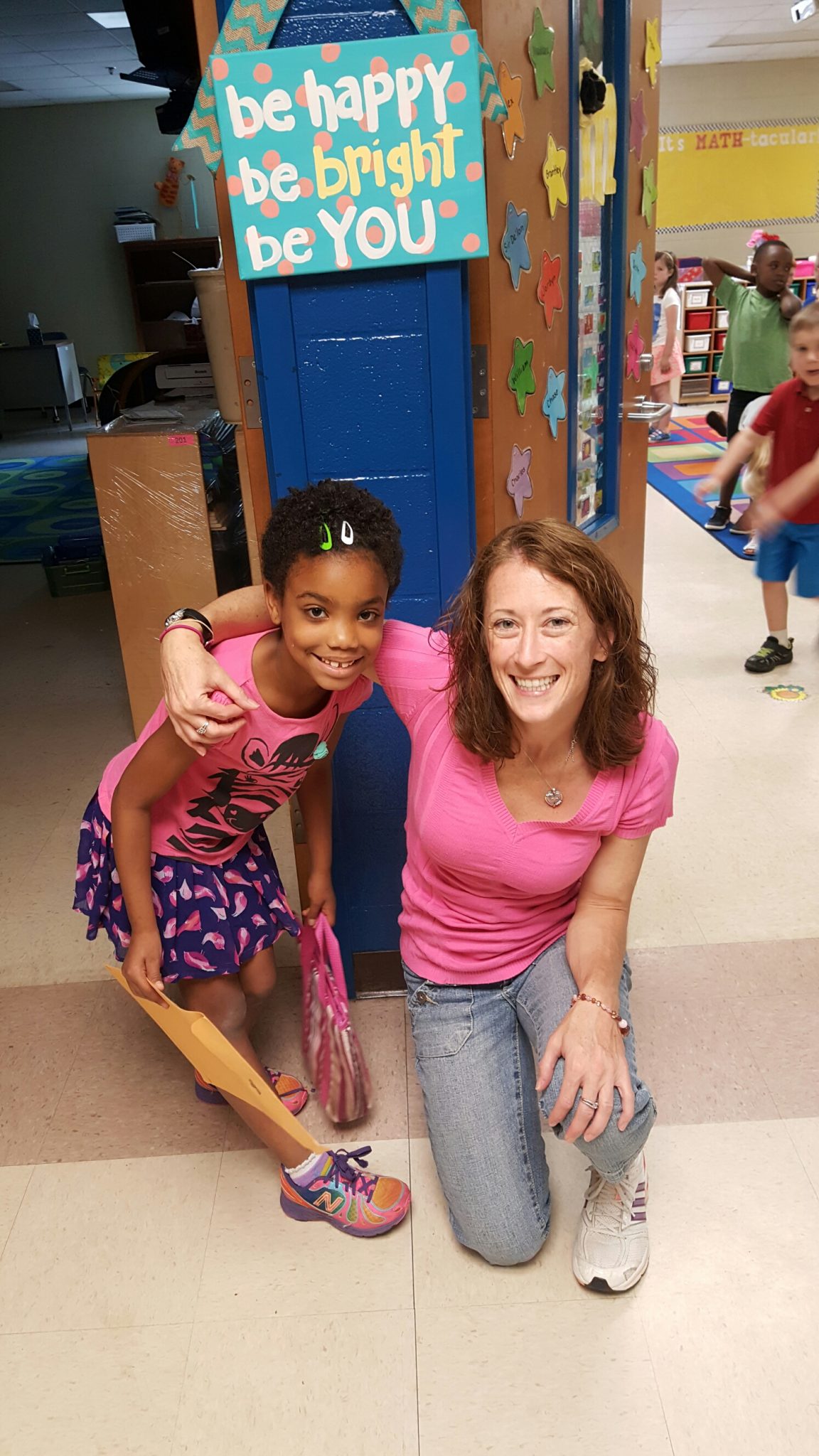 mini and her teacher

I feel like every phase mini hits I’m so unprepared for! It seems like it was just yesterday that I was walking her in for her first day. She sat next to Seth and I was the creeper mom who watched from the hallway as they colored and made awkward conversation. And now she’s heading to first grade. As in grade 1. As in she’s officially in grade school.

This year has been incredible. Not working in corporate America made it so I was present for class parties, school awards, art shows and more. It was lots of fun but there was so much I didn’t know to expect.

Mini’s teacher was pretty awesome. If there were ever any issues, I knew I would get an email and I welcomed that. But there were emails, newsletters, and other random communications sent home. In the beginning of the year I was on it. I kept all of these papers somewhere safe (where that is now, I have no idea). But towards the end? I was struggling man. My suggestion is to set up a station for all this. I ran to Target and grabbed some pretty folders in their $1 section to create a central location for all these papers. There were some that were just “FYI”, things that needed to be returned, and her artwork. Don’t get overwhelmed like I did–organize and then dominate!

Mini’s teacher kept asking me if what she was saying sounded right as I sat there with a blank expression on my face while she reviewed everything. I wasn’t sure what I was supposed to say since this was all pretty new to me and based upon everything the teacher was saying, mini was excelling in everything but her behavior. Pro Tip: Be prepared with a question or two about how to continue what they’re learning in school at home to support what the teacher is doing. This makes you look like you know what you’re doing with this parenting thing way better than the blank stare.

I know, this seems obvious. Either have lunches prepared or buy lunch. What I didn’t anticipate was the effect of school lunches on mini’s body. After having her lunches prepared with love for the past 4-5 years, school lunch had a pretty bad effect on her stomach (I even had a dream I was talking to Michelle Obama about how terrible this was). She dealt with constipation as a result and that’s not fun AT ALL. Preparing lunches daily can seem a pretty daunting task but it’s worth it to know that what you’re putting in their bodies is truly fueling them for their days. Pro Tip: If you pre-package a weeks worth of healthy snacks it makes packing lunch way easier since you’re only worried about the main meal.

Yep. This is the age that you truly have to be aware of what’s going on. On mini’s second week of school there was an incident on the playground. Mini knows how to defend herself so I wasn’t too concerned but some kids just don’t know their boundaries. And now that they’re riding the school bus, they’re with older, meaner kids that will more than likely pick on them–as will their classmates. Pro Tip: Don’t fight their fights for them unless they really need it. Teach them how to handle it and make sure they know you have their back.

We Made It Through Kindergarten!!!! 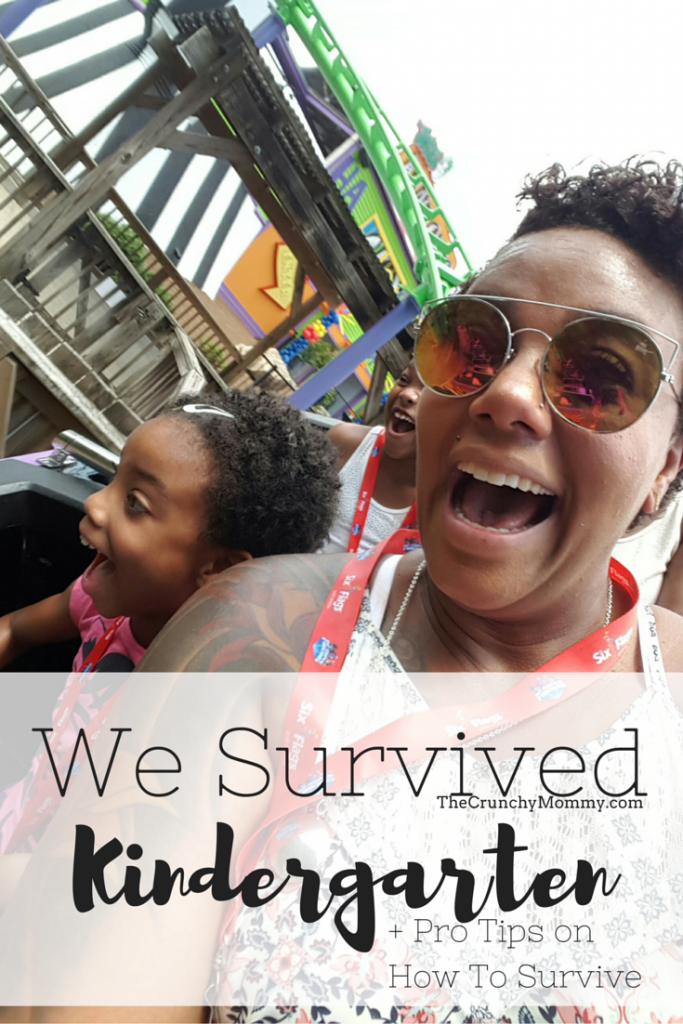 Despite mommy’s lack of preparation and the much needed learning curve, we made it. And what better way to celebrate the last day then with a trip to Six Flags!!!! On mini’s last day of school, I picked her up early and we battled through Atlanta traffic to get to the place where a great time was guaranteed. I surprised her by meeting up with our best sisterfriends TiTi and Little A. 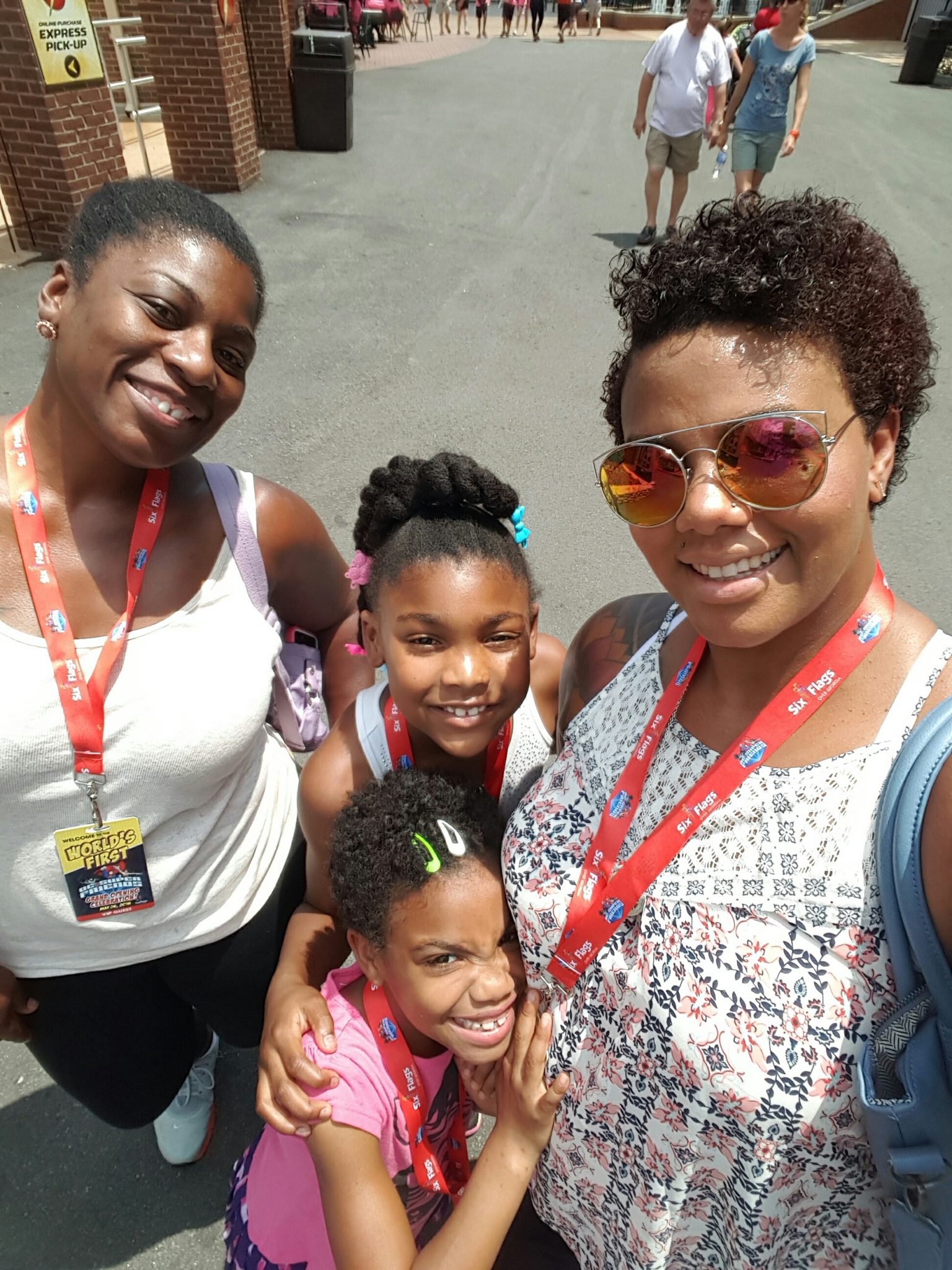 And we were there to test drive the awesomeness of these rides. We are HUGE DC Comic fans so when I found out this was opening up, I knew that I had to take her. It’s located right next to Tiny Town and is perfect for kids that are big enough to want to have some fun at an amusement park but not tall enough for some of the bigger rides–so it was perfect for mini. 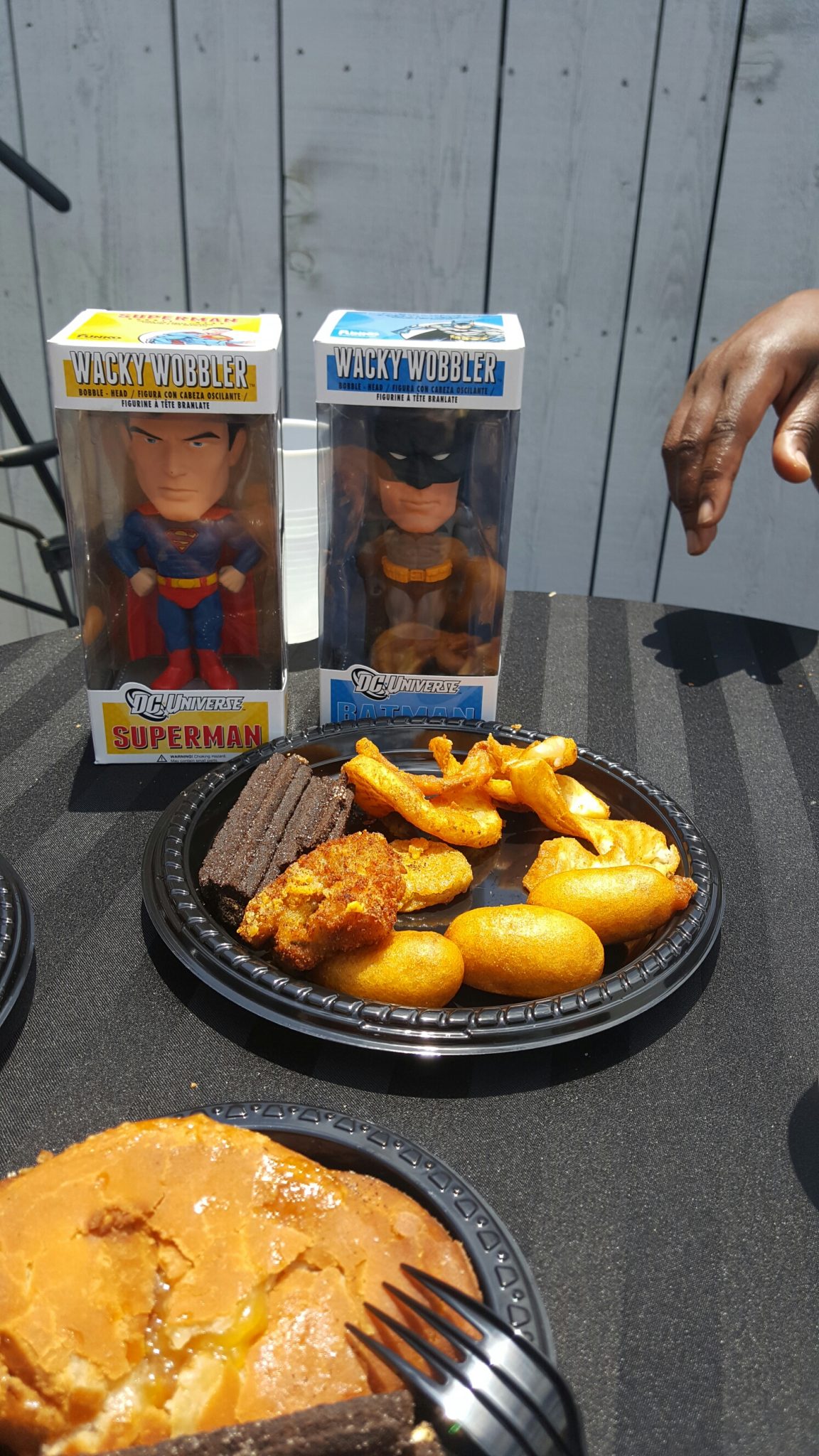 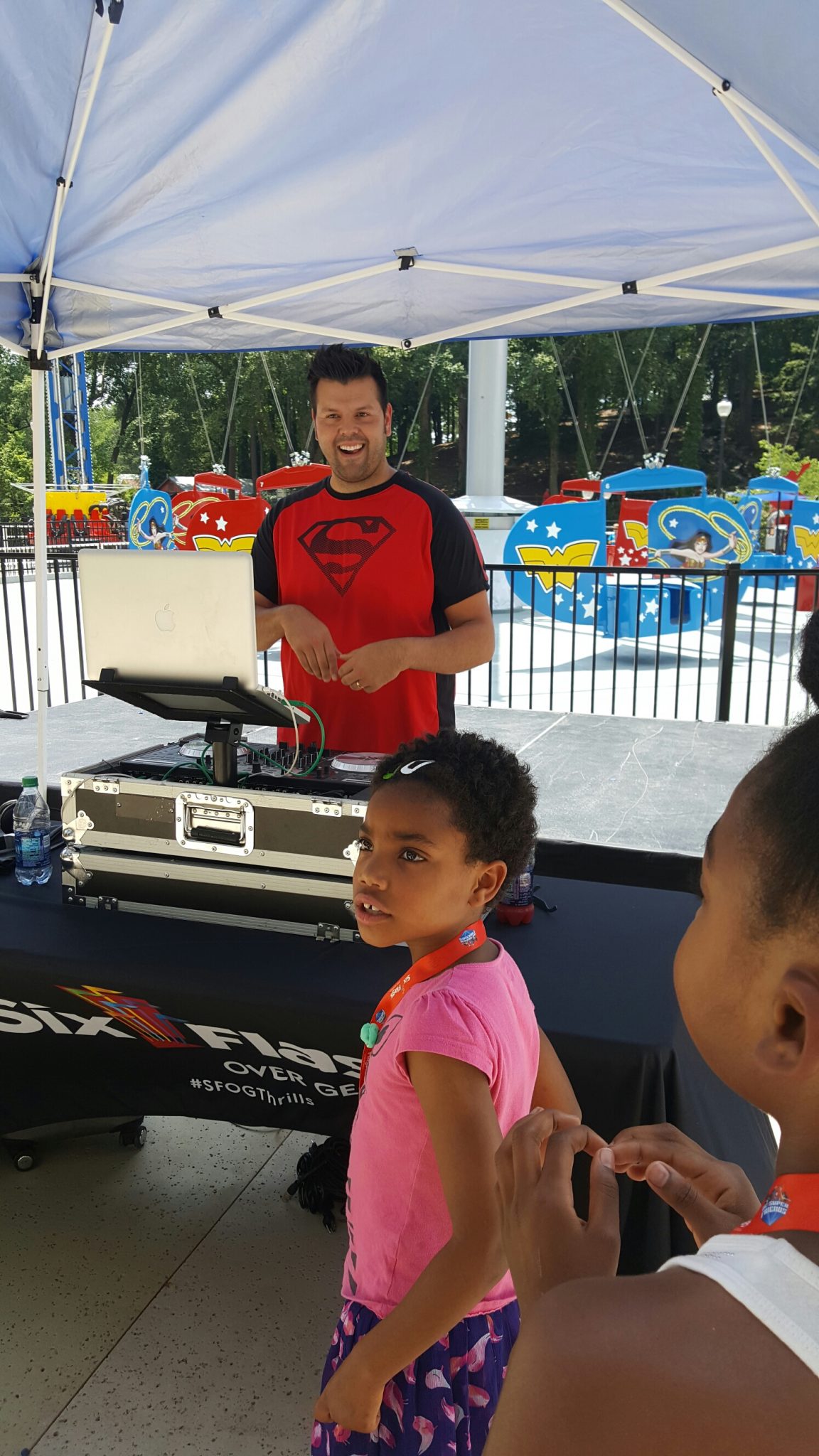 This was the first ride we went on (the only one we adults did) and it was super fun! Even as an adult (who may or may not suffer from some mild fear of heights) my stomach did some flopping around. There were lots of screams and fun on this ride! This one was definitely a favorite. 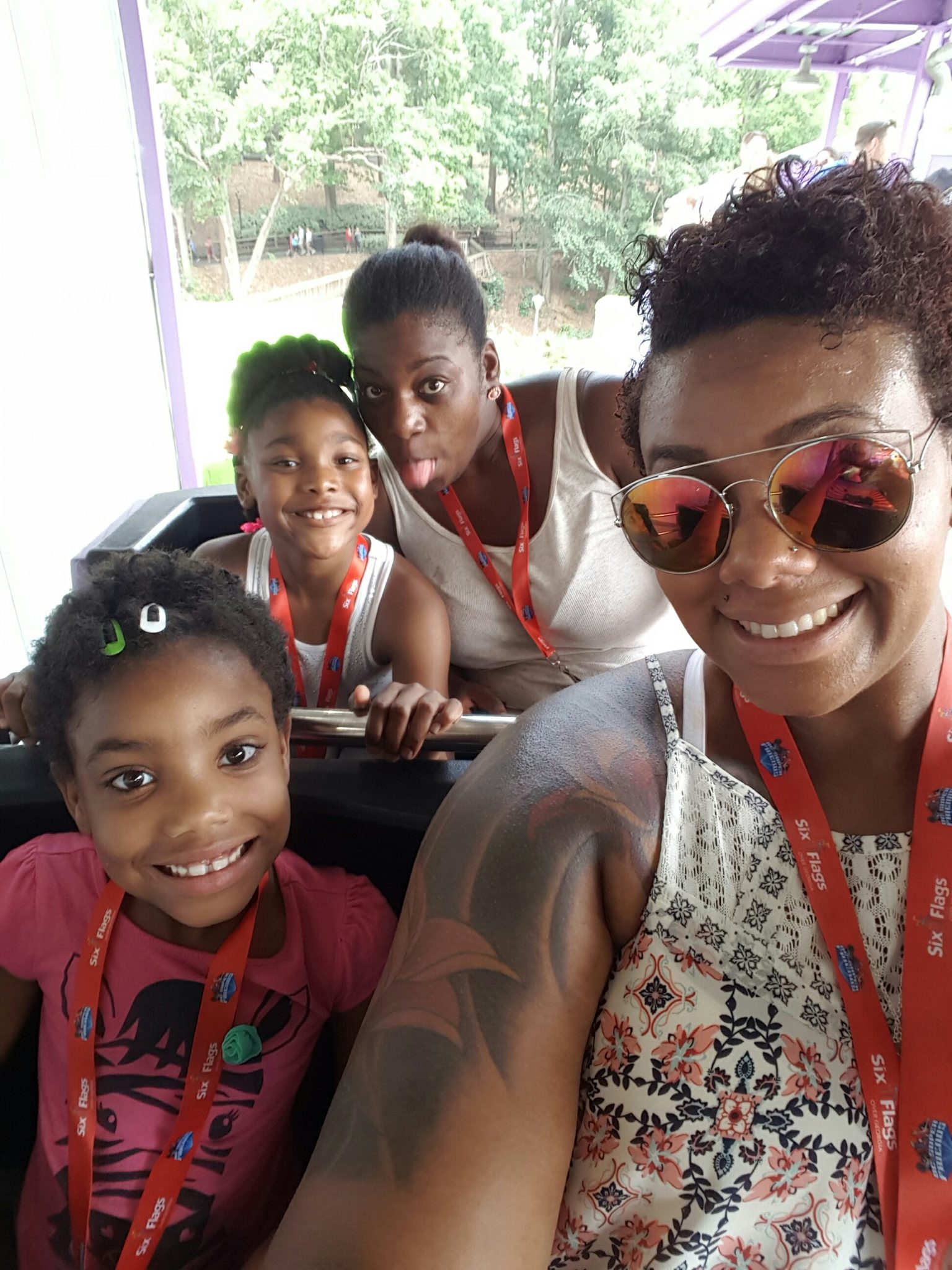 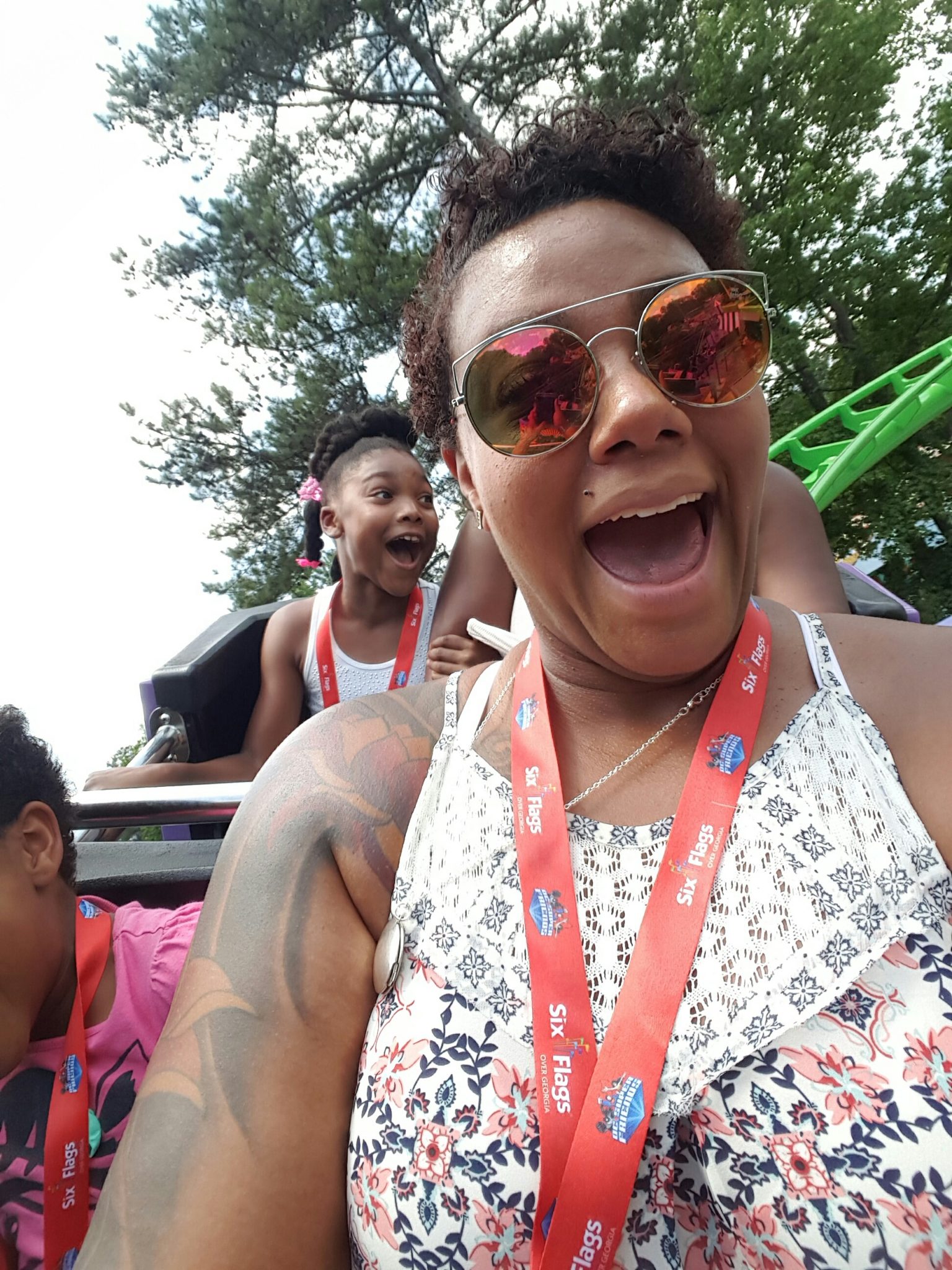 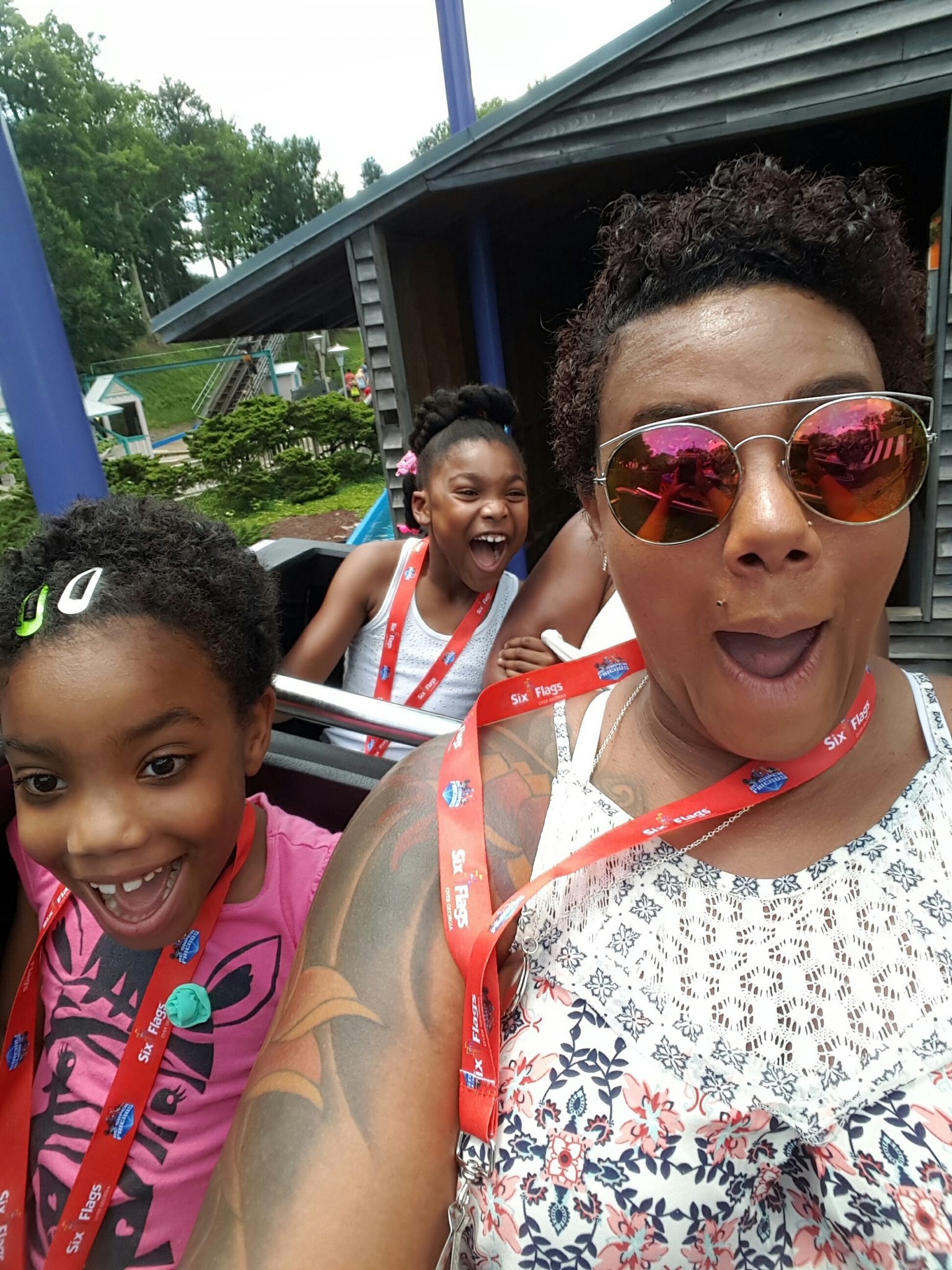 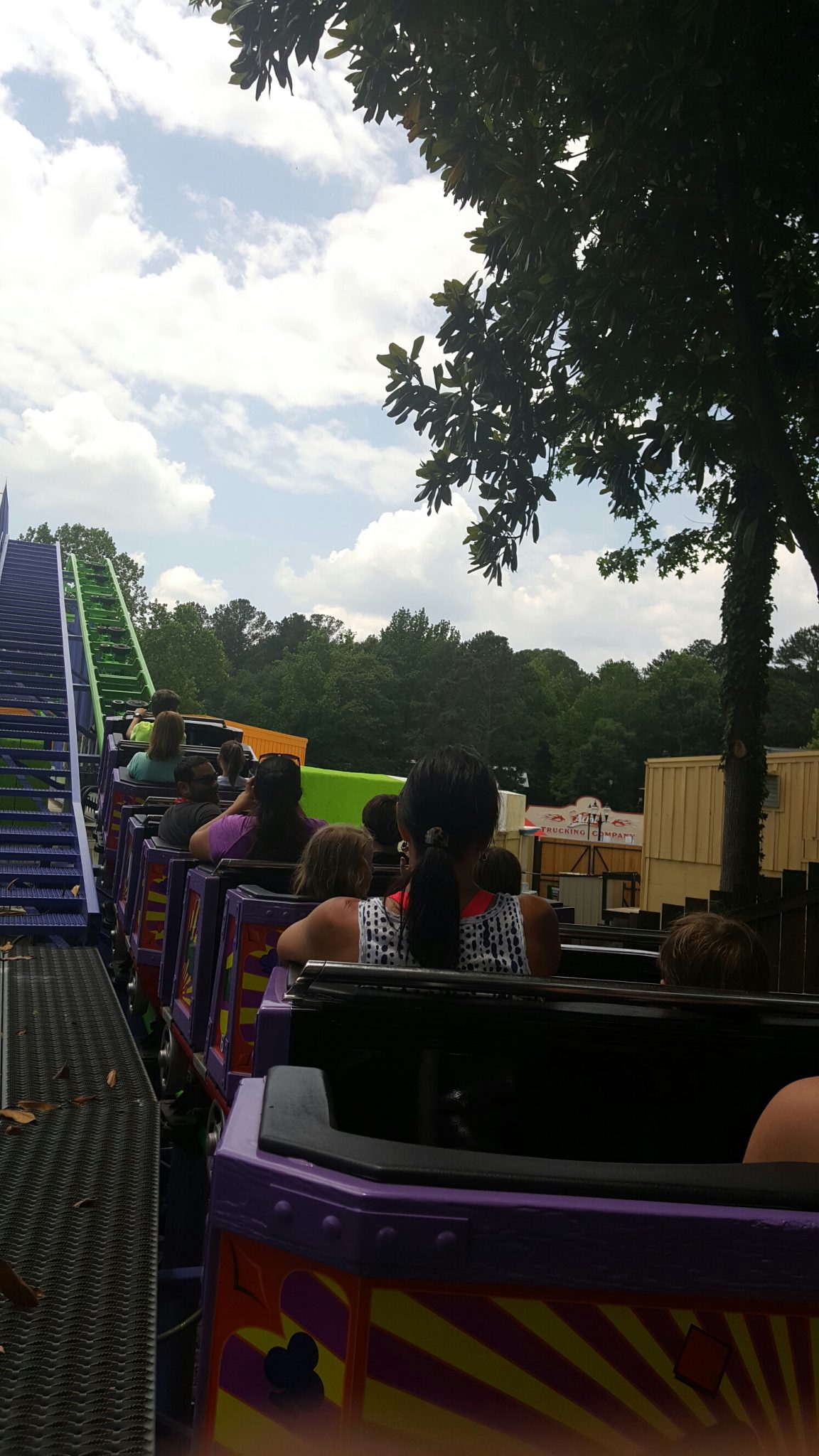 The girls loved this one as well. They hopped into 2 person little jets that they had somewhat control over how they flew. 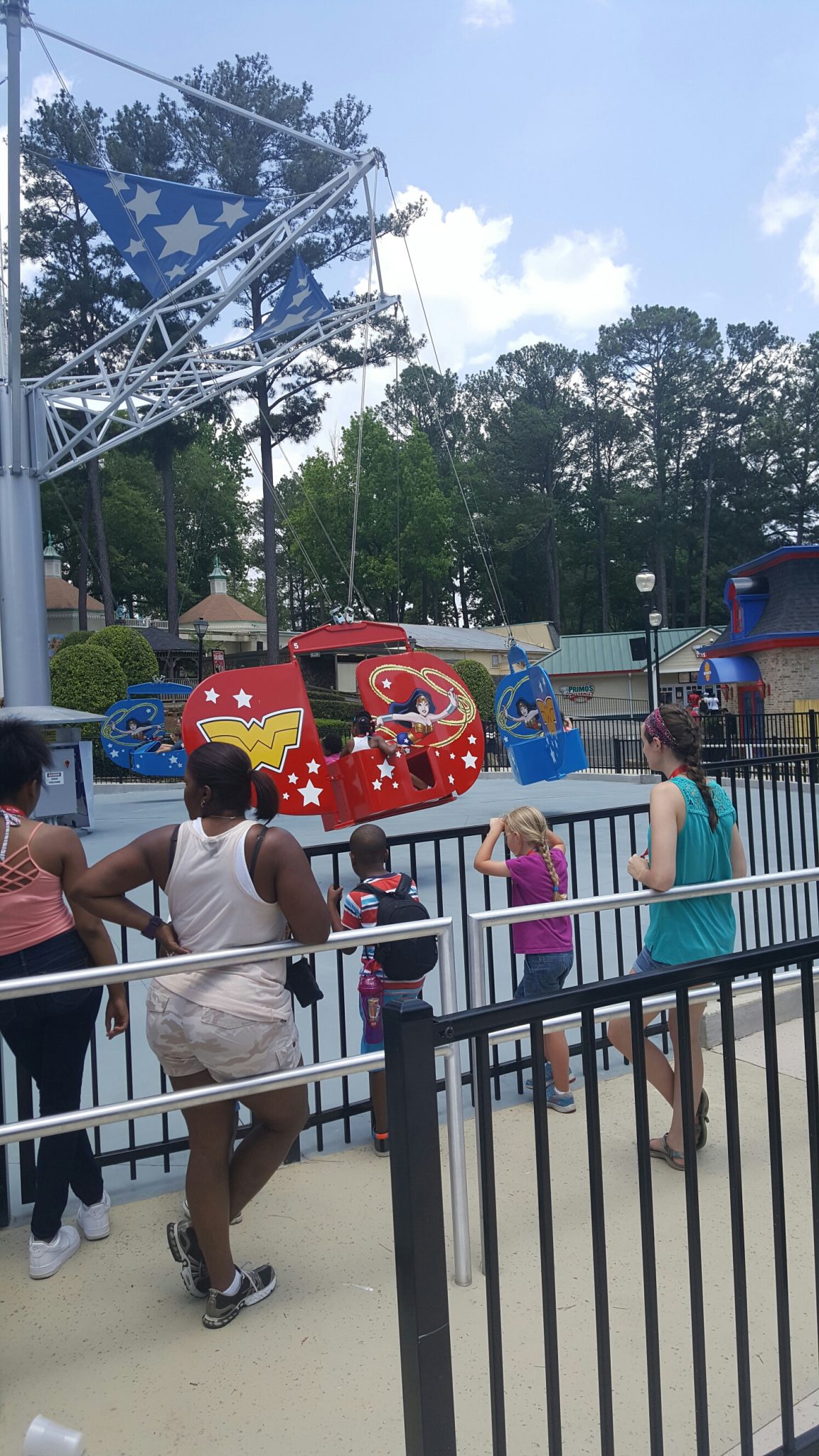 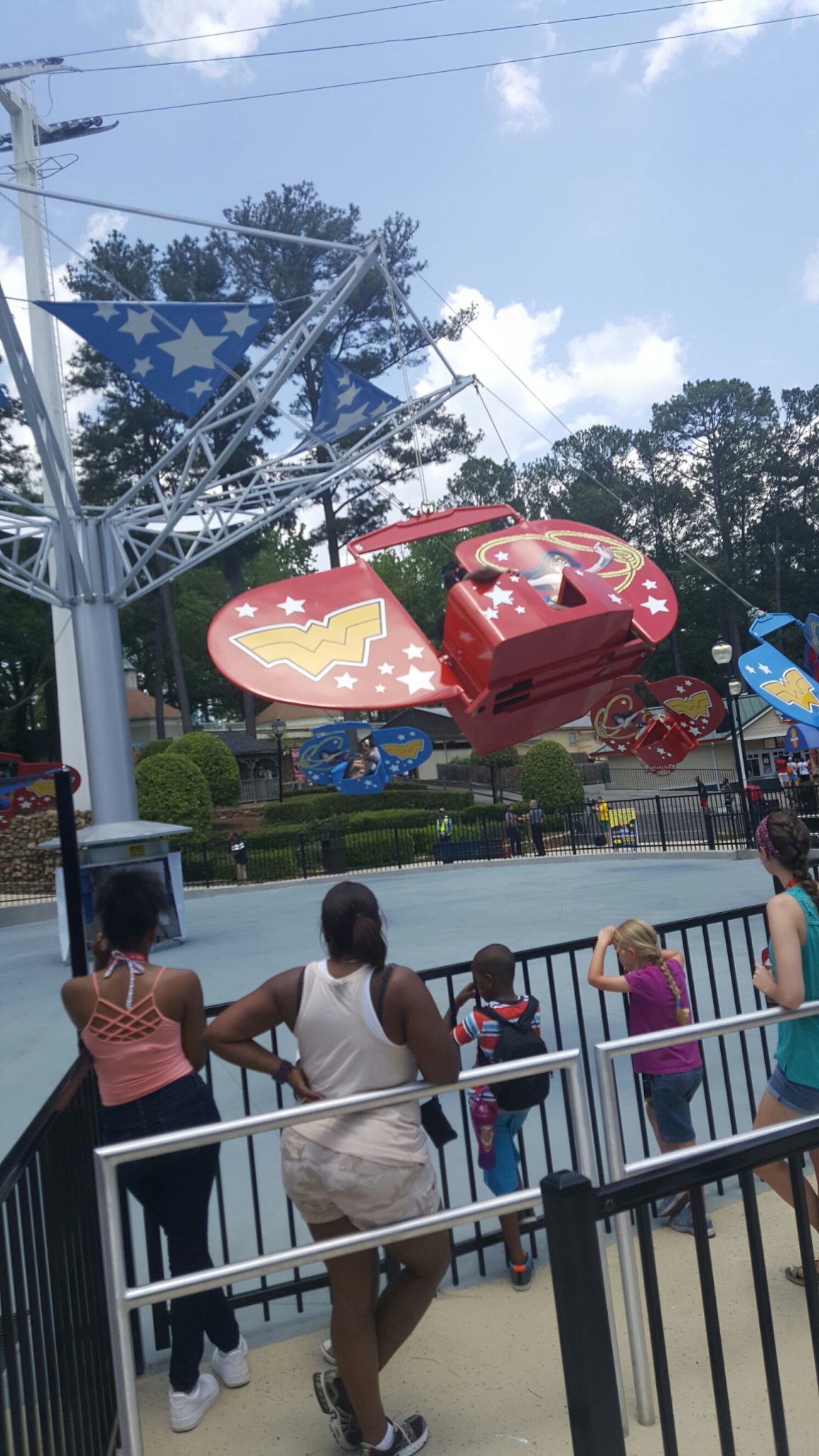 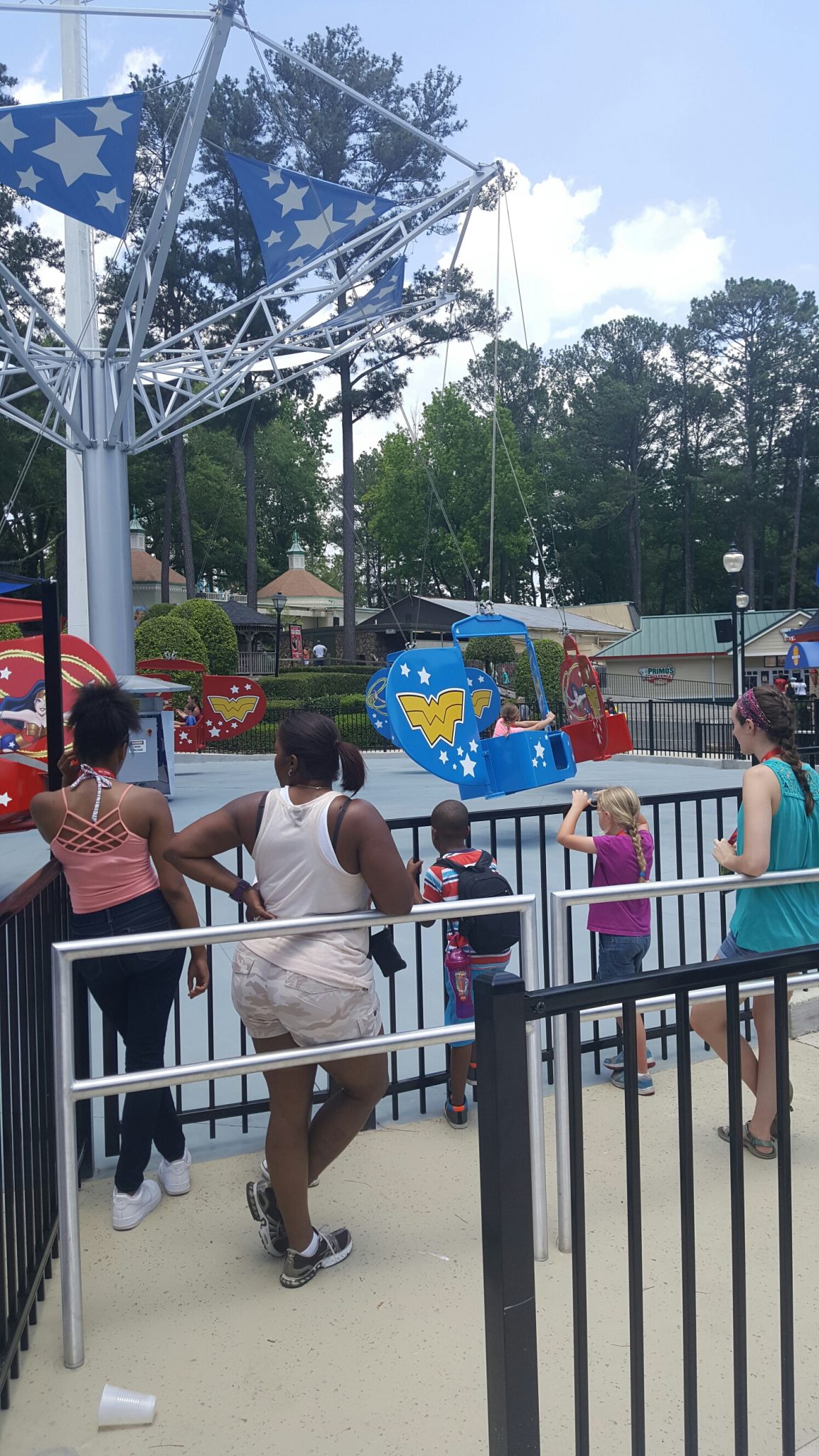 They did this one about 3-4 times because they loved it so much. I think that the drop in your stomach gets addictive!!! 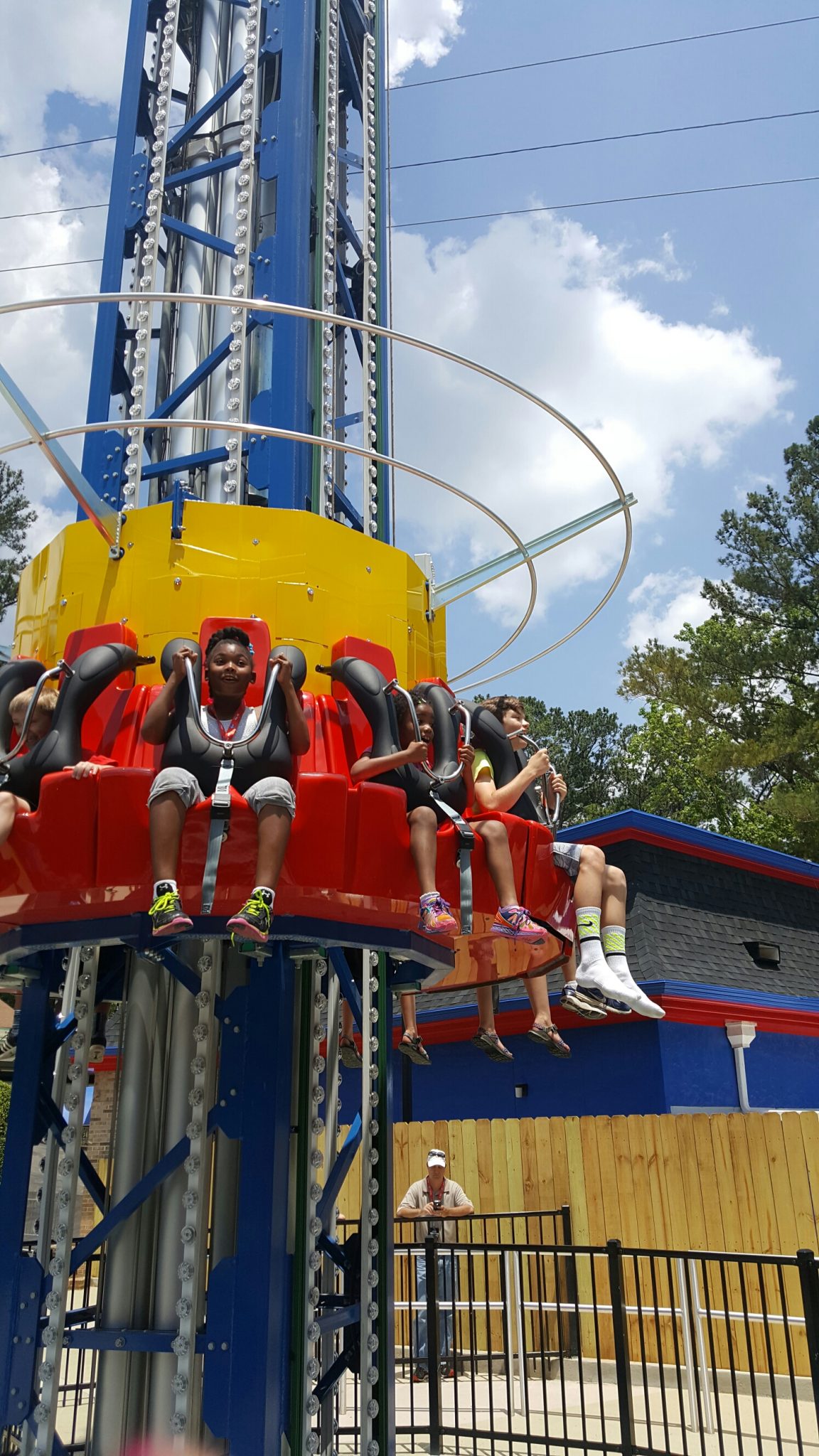 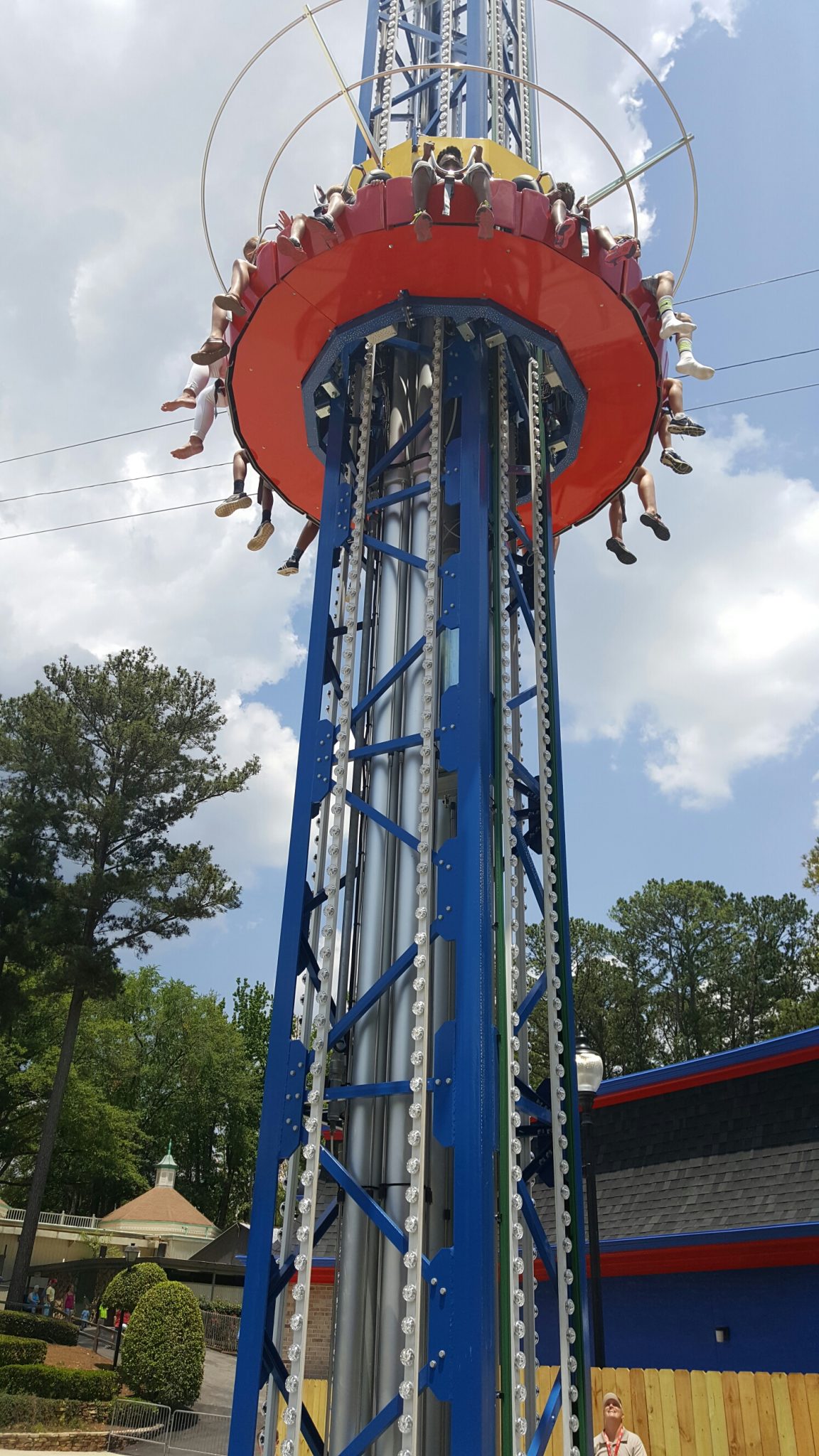 This one was ok. I think that the girls were a little too big for this or maybe we should have started out with it. After the Tower of Power and the Joker Coaster this one didn’t have that exciting element for them. 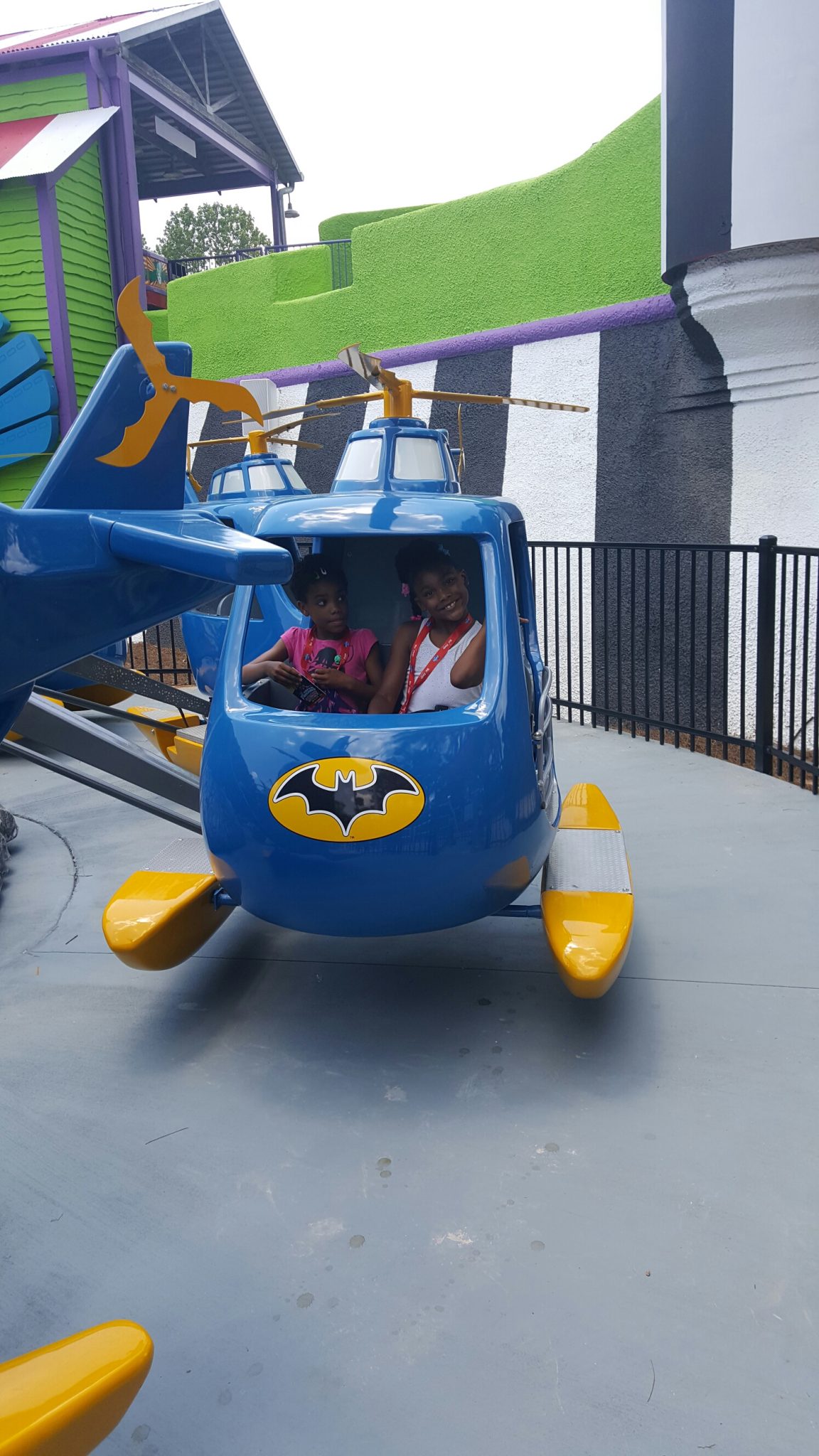 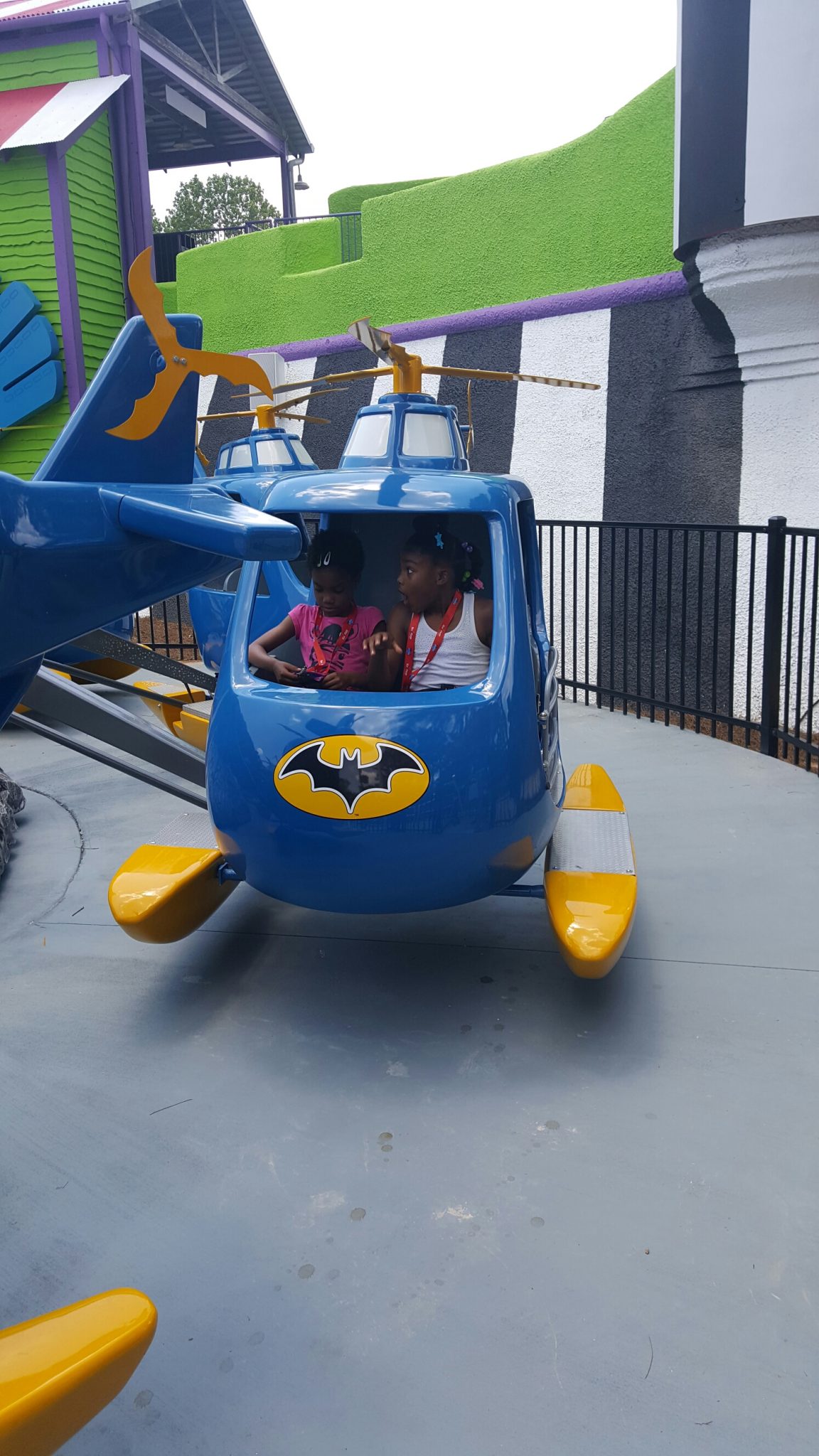 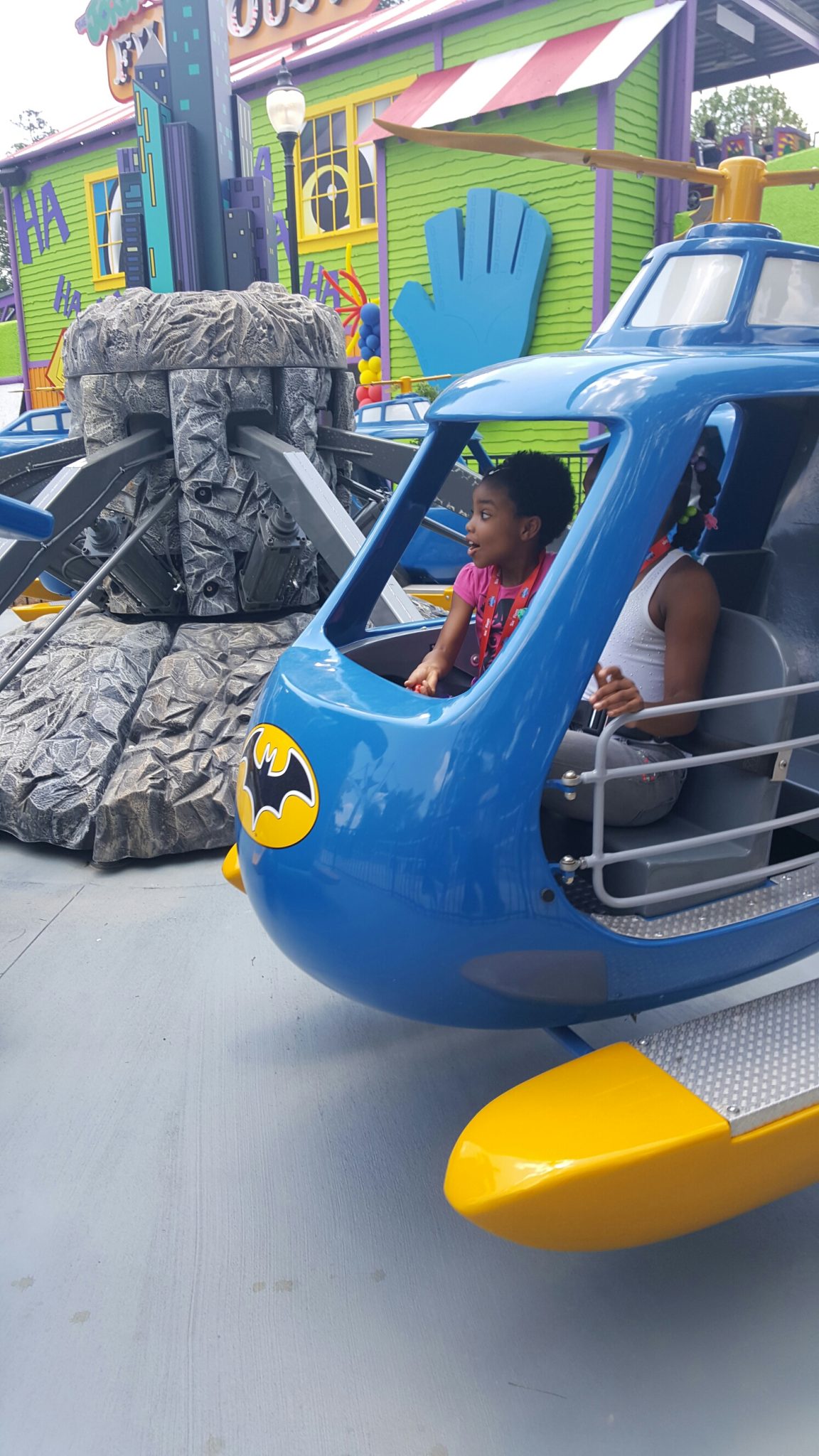 Located right next to her boo the Joker, there’s a little game room for all the arcade lovers in us! We sought refuge from the hot sun here! 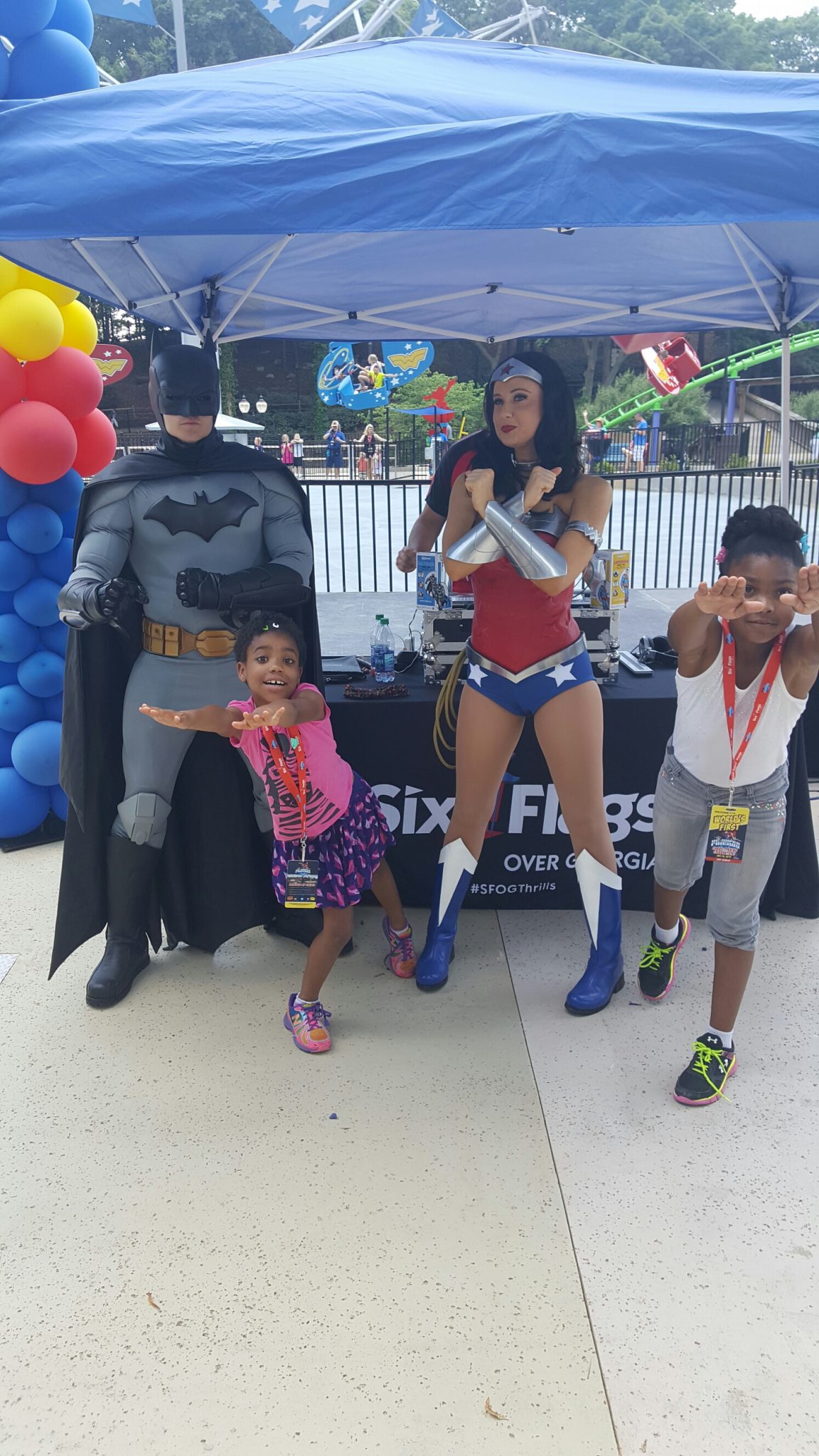 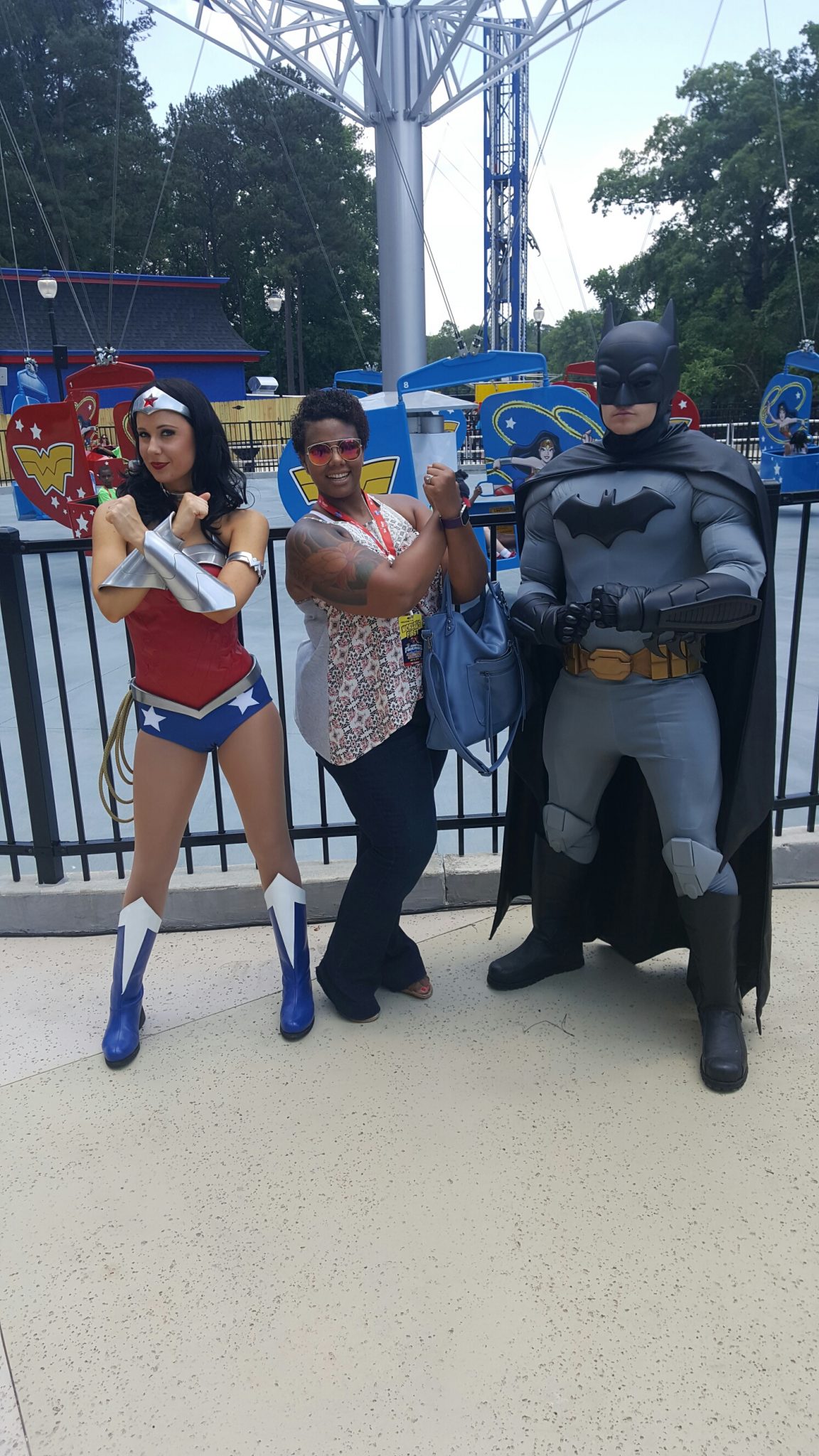 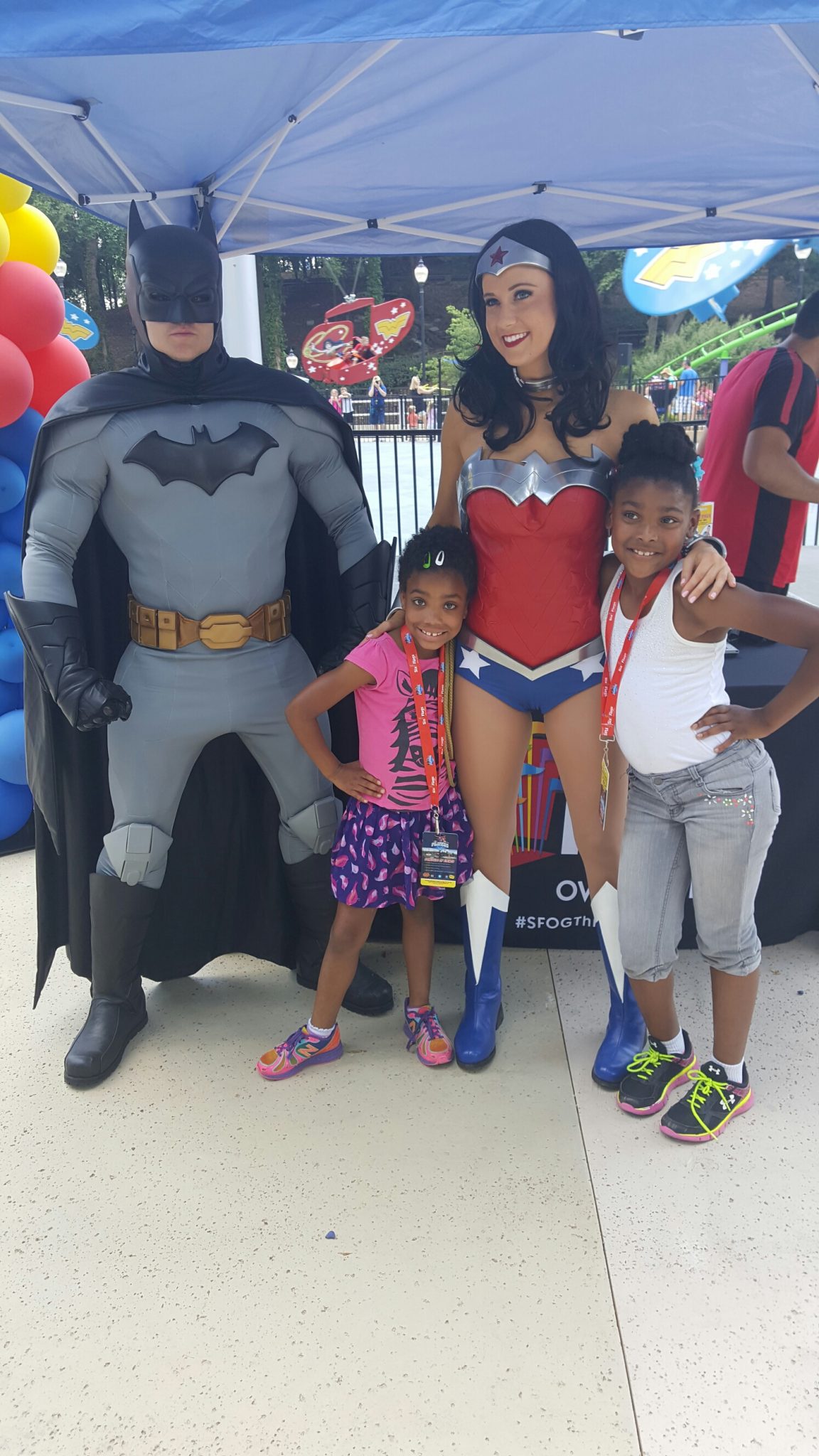 I still can’t believe that I now have an official FIRST GRADER!!!! Time is flying by with these kids but I’m really happy that we were able to make her last day of kindergarten one to remember with the help of Six Flags Over Georgia. 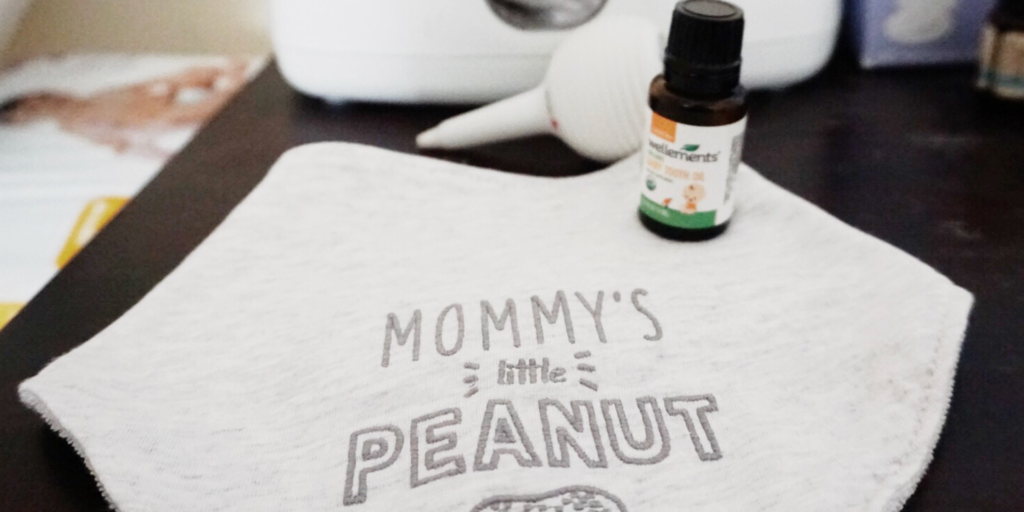 10 Things I Hate About Teething 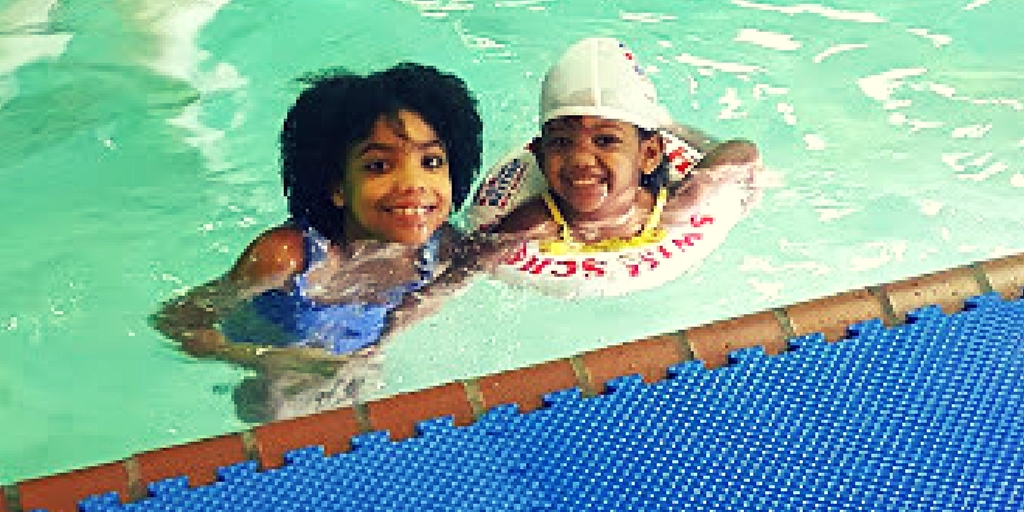 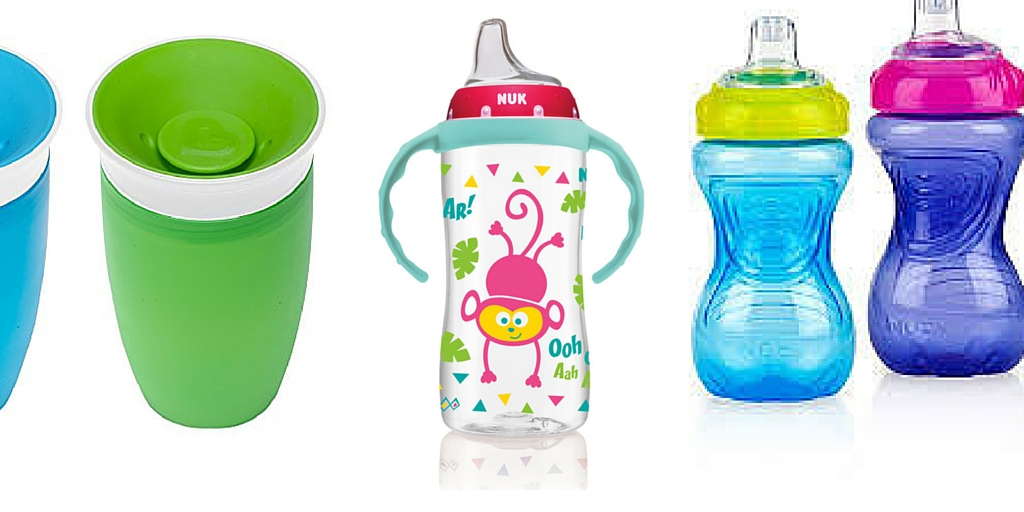